Just added to your cart

When I recieved this paintkit, I first had to put my own numbers on the paints based off printed 4-digit numbers on the paints that I had to match to a list of paints on the paper image that follows the paintkit. About five or six of the paintjars had bad printing on the lid that it was a bit touch an go and educated guesses on what was what, but after a while I figured out which paints went to which number.
Then, when I started painting, I realised that a lot of the paint in areas around the sails and even in the sky bit, that in this site image shows to be beige, dirt yellowish or even light brown, was actually green paint, which looks really weird.
The painting still looks okay at a distance, but up close it looks shite.
I'm not sure if I got a faulty package, but I've never had such different finished product from the image from the website on any of my other paintings. When compared to the colours on the list on the image that shows the numberlist where you can attach the colourcoding to the numbers on the canvas, the colours that I had that turned out green, looks, as I said, as more beige, yellowish and light brownish.
I bought a second kit of the same picture, hoping that it was an error on the first one, I have yet to open and test it out, but it looks as though the green colours from the first kit might look a bit more similar to the numberlist colours, so here's hoping it turns out better than the first.
The two images I've posted are in natural daylight, and in evening indoor light. Both show the green pretty well, and it looks like it's wrong.
I was also a bit annoyed that the lines in this image is bright red, and the numbers are printed so black that I had to paint over multiple times to make them disappear from the canvas, it looks almost as it was supposed to come with a jar of white gesso, to make the printed lines and numbers fade a bit before starting to paint.
My previous kits have all been with grey or faded black ink, both in the lines and numbers. 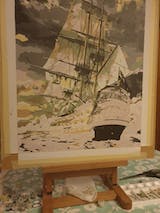 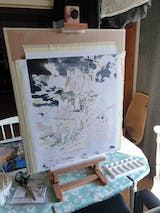 I have ordered 6 paint by numbers kits and 1 was a custom print one. They are absolutely beautiful and so much fun to do! I’m not a painter at all and these are so easy to do!! I also shared photos of the first one I did and the different steps until completion! The first ones I ordered I added the framing to be included, which was nice because they were ready to go! The second time I bought pre wrapped, blank canvas’ from Walmart and took the canvas off and wrapped the painting around and stapled to the back. (They came in a pack of 4 for $12). 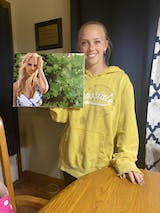 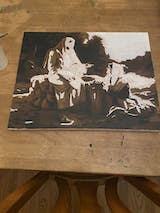 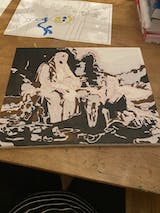 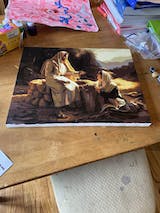 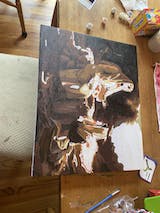 This is my second order from this store. Items arrived as scheduled in excellent condition.

This was my first painting by numbers. It really helped me with my anxiety and I feel accomplished. Can't wait to buy more.

Loved doing this one. Colours are exactly as shown on the picture. Paints and canvas are top quality.

Well i have been working on this painting for many days.It is still incomplete, the miner and small portions are taking too much time to fill. Other than that the quality is satisfactory.

Got my package this week. I have start working on it. Hope so it will look great in the end. I wish I would have ordered the frame also.

I am delightful to have this painting from your store. This painting reminds me of the time when I last visited Sydney Opera House with my husband. Good quality product . Will recommend.

Initially I thought that I made the wrong choice but, Once the painting has completed and i hanged it up in my bed room it does look great.

flawless product. Perhaps I should try a bigger size next time.

This is the best activity for me to spend my free time. Good product.

Unfortunately order came in two months. But the quality is delightful. Pleased.

It looks like it will be fun. I’m going to have to be a little creative though because half the numbers are blurry so I can’t make out what color I would paint that spot.

The quality of the canvas and paints is very good. Very Happy

got in two months delivered very late. But product quality is good.

M
Ship in the Ocean M.M.

Satisfied with product. I will order again.

It is very pretty. Definitely recommended. Next time will order a bigger size.

Received my painting. It is beautiful and exactly same as described.

This is my first painting and I have enjoyed it immensely from start to finish. Beautiful piece!

it’s a great looking painting and it looks a lot like the picture. But due to its size I needed extra paint.

Not as detailed as i hopped it would be, but still beautiful nonetheless (looks so good from afar) Easy to follow. Highly recommend.

These flowers are poppies, not roses

Hi. The canvas came in a little soaked, wrinkled - I would count that on dryness inside of the parcel and lack of freshness.. I wish canvas had a certain cover too. That could prevent it from becoming soaked. This wish is most certainly environmentally-not-friendly. But you may thinks of ways. FOR POTENTIAL BUYERS: During Corona I waited for about 3 weeks for this to be delivered, that's actually not bad at all. Everything came as described: Frameless canvas, paints in a plastic package with the instructions page, plus brushes. Now, about the brush quality - usual cheap-looking brushes. Canvas quality - a little rough, but need to actually try out to conclude anything. This kit was bought on sale for 19 dollars. Thanks, guys. I cannot give 5, because I haven't drawn anything yet, but this review will update :)